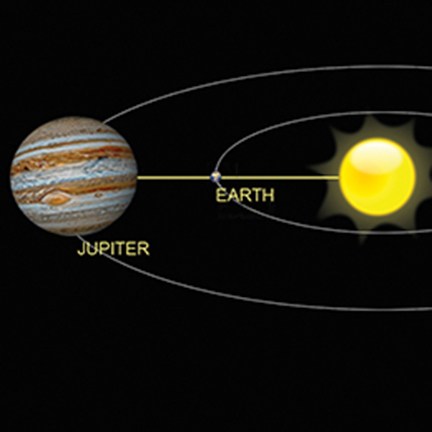 Jupiter, the biggest planet in our solar system, is at opposition during March 2016. This means that Jupiter is opposite from the Sun in the sky when seen from Earth. The solar system is lined up so that Jupiter, the Earth, and the Sun form a straight line with the Earth in the middle, on the same side of the Sun as Jupiter. Opposition also means that the Earth and Jupiter are as close together as they ever come. Because Jupiter is relatively close, and at opposition, it can be seen easily without a telescope. In March, the planet will outshine everything else in the sky, except for the moon. Because of differences between the orbits of the the earth and Jupiter, at opposition only happens once every 13 months.

The Earth is the third planet from the sun. Jupiter is the fifth. Mars and an asteroid belt lie between the two planets. Jupiter is named for the king of the ancient Roman gods, probably because it is the largest of all the planets. If the Earth were the size of a nickle, Jupiter would be as big as a basketball.

On August 5, 2011 NASA launched the Juno spacecraft from Cape Canaveral Air Force Station, on a mission to Jupiter. Unlike previous probes that have traveled far out into the solar system using nuclear power, Juno uses the energy of the Sun. It is powered by three large solar panels. The spacecraft will arrive at Jupiter on July 4, 2016 and orbit the planet for 20 months, studying it and its atmosphere.

NASA is now getting ready to launch another spacecraft to Jupiter to find out more. Scientists are very interested in studying Jupiter’s large moon, Europa. They think that there is a huge ocean underneath Europa’s frozen crust. Water is a main ingredient required to support life. Some scientists think Europa may have the greatest potential for life in our solar system, outside of the Earth. The launch is planned for 2022.

PRINT OUT JUPITER AT OPPOSITION