What Do an Octopus and a Book Have in Common?

Home / Blog / Blog / What Do an Octopus and a Book Have in Common? 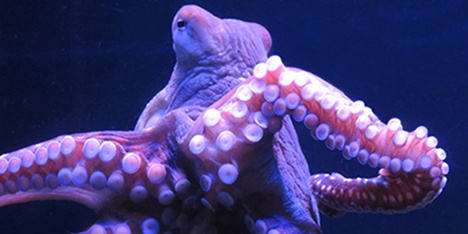 You shouldn’t judge either one by its appearance.

Octopuses (or octopods, but never octopi or octopussies) embody everything creepy and mysterious about the sea. Recent news coverage about Inky, a young male octopus who cleverly escaped from the National Aquarium of New Zealand, provides us with a different perspective.

Even though our bodies are very different, octopuses and people have much in common. Octopuses are curious, like us. Their brains are complex, making them intelligent. They’re able to learn from experiences, remember things, use tools, and solve problems. Octopuses also recognize other octopuses as individuals and have friends, although they’re usually solitary in the wild. Octopuses can make friends with people too, and recognize their faces. Scientists have observed octopuses in captivity reaching up with their arms to touch or hold hands with people they like. And, if they didn’t like someone, they have been seen squirting water at that person to make them go away.

So, why and how did Inky escape? His caretakers at the aquarium said that Inky was popular and had many human friends. But he was also very inquisitive and liked exploring. In the middle of the night, Inky, who was about the size of a soccer ball, moved the lid on the top of his tank to one side, squeezed through the small gap, and climbed down the side of the tank. Wet tracks showed that he scampered across the oor and slithered through a drain pipe that extended to the sea.

To his human friends, Inky was probably very special. But there was nothing extraordinary about his escape. All octopuses are natural escape artists. They may not have opposable thumbs, but octopuses use their extremely flexible arms like we use our hands. (They can even open jars!) They have no bones in their bodies which enables them to slip through tiny spaces. And of their 8 arms, 2 actually act more like legs, making them able to walk across floors when not swimming.

To learn about octopuses: