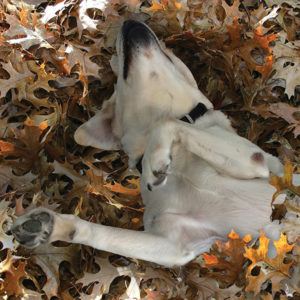 In the northern and much of the mid-western United States, we have hot summers and cold winters. Autumn begins with the September Equinox. The falling leaves usually signal falling temperatures. Individual animals survive the change in the seasons in different ways.

Some animals migrate, which means they move from one region to another with the seasons, usually to find better food sources. Well known examples of animals which migrate include birds like Canada geese, robins, and hummingbirds. Monarch Butterflies also fly south to escape cold northern winters. In the ocean, some whales migrate, and on land herds of American bison are on the move too. Even earthworms, which we may think of as too slow moving to travel very far, do their own migration by digging deeper into the ground to stay warm.

Winter in the Woods, In the Woods with Danny and Bee Set

Animals who hibernate survive the cold weather by staying in a warm place and sleeping the winter away. They eat a lot before their deep sleep, storing up fat. Because of the saved fat, hibernating animals need little or no food. Groundhogs, black bears, skunks, and some bats hibernate. Frogs and turtles do something similar by burying themselves in the mud and remaining dormant until spring.

Animals which stay active throughout the winter have adapted to the seasonal changes by making their own corresponding changes. They grow a thicker layer of feathers or fur to help them stay warm. On the coldest days, many will hide in a sheltered, safe place.